Then in 1961 the first electronic calculator (ANITA, source: Wikipedia)  is introduced.  It will prove to be the start of a major change in history.

A sophisticated mechanical calculator in 1968 was very expensive, very noisy and basically only capable of adding, subtracting, multiplying and dividing. In 1971 the same functionality was available in electronic calculators with a significantly  higher speed, much cheaper  and completely silent.

So it took the electronic industry only about 10 years to fully take over the mechanical calculator market. 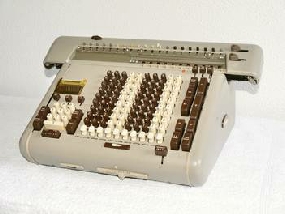 It wasn’t just the calculator market being shaken by the upcoming electronic industry.  Although a bit later also the typewriter market was hit by this development.

Although the first mechanical  calculator with  a sophisticated carry mechanism  was invented in 1642 by Blaise Pascal  (source: Wikipedia) production was very limited until about 1850. It took another 50 years before calculators became a more and more common device in offices.

Between 1930 and 1960 extended functionality as well as speed  raise their construction to the limits of mechanical complexity.

My  modest collection  focuses on showing the fast take-over of the calculator market by electronic companies leading to a shutdown of several factories and putting  a lot of highly qualified mechanical engineers out of their  jobs.   Many families must have been affected by this rather sudden and dramatic change.

The change also affected other office equipment . That’s why  two typewriters are in my collection;  a late mechanical IBM Selectric and an electronic Brother Daisy Wheel typewriter with a small display and some primitive editing options.