The 131s is a simple 13-digit calculator.  It adds, subtracts, multiplies and divides.  During calculations the decimal point is automatically placed in the correct position. There is a constant function, however no memory to store intermediate results. With 48W it’s power consumption as well isn’t much less than mechanical calculators.  Weighing a bit more than 11 Kg it isn’t  much lighter either.
The main difference with the more common mechanical machines is that it was silent and fast.  It was a bit expensive compared with mechanical equivalents, but in the same range as other electronic machines.

It seems to be based on the Canon 130 which, according to Canon’s history was the world's first 10-key electronic calculator introduced in 1964. (See https://global.canon/en/corporate/history).  It was developed in a period when semiconductors couldn’t handle the relatively high voltages needed for nixie-tubes which existed at the time. Therefor the designers used a kind of light pipes.  One transparent plastic sheet is used per digit.  A digit is formed by small holes drilled in the form of the digit.  When a sheet is illuminated from the side the digit is clearly shown.  To display 0 ... 9  ten sheets are used for each display module  .  Two extra sheets are used for the decimal point and the green multiplication bar.   The Canon 131s uses small 13V light bulbs to illuminate the total of 12  plastic sheets per display module.

Only in the late 60’s integrated circuits of the 7400-series were available and quite suitable for this kind of application (See the Philips P252 which contains lots of these integrated circuits.)   However, the 130s contains 545 transistors and 868 diodes ( I hope I didn’t miss any :)  ).

If my copy is representative for the 130s, than it probably wasn’t a reliable machine.  (More information in:  repair info)

Subtraction: like addition, but using the red =-key in stead.

Multiplication:  Like division using the x-key in stead of the :-key.

The ---> key allows positioning of  the decimal.

The Cl-key clears the display,  .

The Clear-key clears the machine and puts the decimal point to the right. 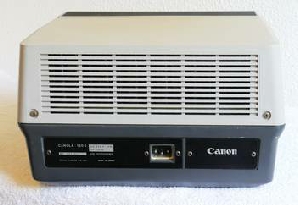 1969?  (It appears one year only in Büromaschinen Lexikon)